Too many students graduate from colleges (2- and 4-year) and find that there are no jobs available for the degree they've earned. It's important to begin career exploration in high school and take it seriously to save time, money, and effort. You can explore careers in high school through community experiences, such as volunteering, job shadowing, part-time employment, and internships. Keep the exploration process and conversation going as your student's interests expand, skills improve, and new doors are opened to him/her.

Volunteering is providing assistance to improve the quality of life for the people in the community through environmental, personal, cultural or civic involvement. Community experiences help students apply skills and knowledge, develop workplace skills, and gain valuable experience. Students will also make important contacts that may help reach personal goals. Community experience also fosters the development of a sense of caring for others.

Students may be involved in community or service activities throughout high school. This may be in a form of a class or club activities such as food drives, tutoring younger students, organizing a campus clean-up day, or coordinating events that promote goodwill. 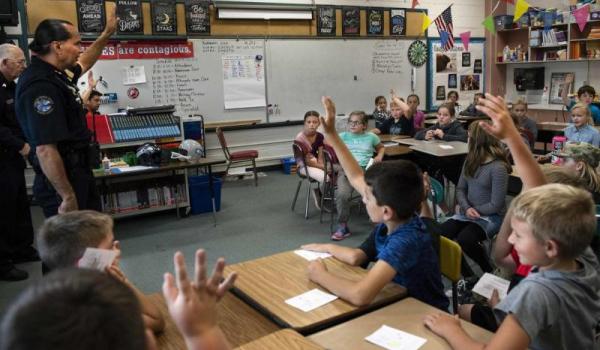 TOLEDO — What a difference six years can make.

In 2013-14, students’ scores on the standardized math and English tests at Toledo’s elementary and middle schools were among the lowest in the state, according to district officials.

This year, the district surpassed the state’s averages in math and English, with 51% passing the math test and nearly 64% passing the English exam districtwide. It was the only school district in the TDN circulation area to exceed state averages in both subjects.

The turnaround was all the more remarkable because the neighboring Winlock School District had the lowest scores of all school districts in the area this year, despite nearly identical levels of teaching experience and student demographic background.

The turnaround was all the more remarkable because the neighboring Winlock School District had the lowest scores of all school districts in the area this year, despite nearly identical levels of teaching experience and student demographic background.

Toledo educators say they have no silver bullet or magic elixir that explains the improvement. They credit a combination of using test score data and sheer determination, which is reflected in Superintendent Chris Rust’s assertion that scores still are not high enough.

“We’re only getting half the kids (passing), so we’re not there yet,” Rust said.

Toledo Elementary School Principal Angela Bacon said she is grateful to be above the state’s average, but the district had set a goal of 80% passing in both subjects.

“We were disappointed by the results, and we are digging into the data to see why,” Bacon said.

The district will continue to build on systems it already has to reach its goal, Bacon said, instead of starting with something new.

“No decision was made without consulting the data, because prior to that it was more like hunches, ‘I think this might work,’ ” Bacon said. “We took a systems approach and said it’s not your kid, they’re our kids, and what are we going to do to help them?”

“We had a lot of coaches and supports put into place, as well as collaboration, and started looking at data,” Ogden said.

In the elementary school, Bacon said they also worked to make sure each child got help without stigma. School staff, for example, adopted “Walk to Read,” where all students switch classes at the same time, some to read in a different classroom, others to get specialized help.

“During Walk to Read, everybody gets up and moves around, so there’s no stigma around leaving to get help,” Bacon said. “We support kids at every level, so every kid gets exactly what they need.”

At Toldeo High School, there’s a dedicated advising period to check on grades, said Principal Martin Huffman. During that period, teachers also run a math and ELA lab to give students extra help, and there’s a schoolwide writing program.

Recently, the high school students wrote fables, Huffman said, and then went into second grade classrooms and read them aloud. That kind of connection between schools is important, Bacon said, and not necessarily available in all schools.

“It’s one of those things we take for granted, but I don’t think it’s done everywhere. It’s unique,” Bacon said. “It gives (the elementary school students) something to aspire to, which is so important.”

The district has also been taking a “whole child” approach, meaning it tries to address factors in students’ lives that could undercut learning, according to Bacon.

“We started with the foundation of curriculum, but you’re not going to get what you hope to get until you look at the whole child,” Bacon said.

Bacon said such a change also couldn’t be achieved by working alone. The district learns from and collaborates with surrounding districts, Bacon said.

“It’s all about partnerships,” Bacon said. “We’re not a wealthy community, but if a kid needs something, they get it.”

Toledo superintendent Rust said his next focus is how to best help struggling students. Specifically, students in special education and students below the poverty line tend to lag behind their peers, something Rust said is common across the state.

“One of the things the data is telling us, throughout the state, is that equity is the next frontier,” Rust said.

It’s also important, Rust cautioned, to remember that standardized tests are not the only valid measure of district success. He said Toledo, while improving on its testing scores, has plenty of room for improvement in many areas.

“If you look at districts through different lenses you’ll see them outperform us,” Rust said. “Everyone is focusing on a different part of the child, but you will find stellar work going on in every district.”

As for next year’s tests, Bacon said “the bar is high, and we’re just going to keep working for it.”

Several months ago Rebecca Corbus from Wilcox & Flegel contacted the school district to see if kids had needs their company could meet. After reviewing needs from numerous schools employees from Wilcox & Flegel chose to support Cascade Middle School. On November 30, employees from the company dropped off loads of clothing, backpacks, shoes, food, school supplies, personal hygiene products, gift cards for shoes and $500 in cash.

It was an amazing morning at Cascade, all made possible by the generosity of the employees at Wilcox & Flegel – thank you! Read the full story in The Daily News here.